Welcome!
Close
Would you like to make this site your homepage? It's fast and easy...
Yes, Please make this my home page!
No Thanks
Don't show this to me again.
Close

Introduction:  A Testimonial on War
In the following brief narrative, War, Love, Loss, and...Hope, Karen guerilla fighter, Mahn Robert Ba Zan, recants his war experiences in an honest and no holds barred fashion. Members of Zan’s ethnic group, the Karen, have been embroiled in armed conflict with successive Burmese governments for the last 50 years. His accounts clearly show the heavy price this war has extolled on combatants on both sides, as well as the civilian population. Zan’s story is one of both victory and waste, revolutionary fervor and hopelessness, and is perhaps, a miniature representation of the nature of war itself. Living in a torturous paradox, Zan, a man who detests killing, feels impelled to shield his people from the savagery of the Burmese Army. Despite the travails of war, Zan holds fast to his ideals and wishes to see all those who are abused and exploited by the Burmese regime, including the Burmese foot soldiers whom he must face on the battlefield, to someday realize the dream of peace and hope for Burma. 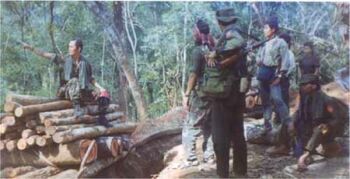 
Background: The Struggle
The Karen revolutionary struggle in Burma is among the most brutal, longest running, and least known armed conflicts of the modern era. The current military dictatorship in Burma, whom the Karen revolutionaries oppose, has been staunchly criticized by a myriad of nations, as well as world, religious, and human rights organizations for brutalizing its own people. Today, in the hills and jungles of Burma the Karen and a handful of other anti-Burmese military dictatorship groups continue to hold out against the illegal and abusive Burmese regime. Presently, there are nearly 300,000 peoples from Burma that are refugees.